Just letting everyone know that I just completed a purchase of these items along with windshield rubber from Phil at Sebring International. Nice stuff but very pricey, especially due to the unfavorable exchange rate.

The grill surround is a very nice cast aluminum piece that is polished. The windshield pillar trim is formed aluminum sheet that is also nicely polished. 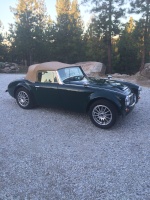 Does the grill surround fit the contours of our body? I have read somewhere that it is not a perfect fit.

was this ever answered?
I thought about getting a hood and a grill surround from Phil

I bought a grill surround from SI.  It is not a perfect fit.  The Classic Roadster grill opening is wider and very slightly taller than the Sebring International grill (on my car at least).  The SI grill appears to be approximately the same size as an original Healey grill (I have attempted to fit one of those as well), but is flat on the side that contacts the body, just like the CR grill.  The original Healey grill is a big no go.  It would require an extensive rework of the grill opening.

The SI grill surround could be used, as is , since it is close, but I will be filling and recontouring the grill opening with fiberglass based body filler.  It has a little more gap than I like.

The SI grill surround that I received appears to be cast brass, since it is much too heavy to be aluminum.  It is also chrome plated.  I have to say that I'm not really satisfied with the plating.  It has several places where the brass is pitted and these pits show through the plating.  I will eventually see about having it rechromed to repair this.

Considering that no other reliable source exists for these trim parts, the flaws will have to be accepted if you want that bright look. I had already thought about making a pattern and attempting to cast my own aluminum part, but that has many potential pitfalls, as I have never done any sand casting.  There is a small foundry about 3 hours from my house that would have probably been the better choice if I had my own pattern.  I also gave some thought to forming one from strips if stainless and welding it all together.  That would be a very tedious fab job indeed.  Even with the plating flaws, the SI part will be usable and a whole lot easier.

I also need to add this.

There is a process that allows fiberglass parts to be chrome plated. This is not chrome paint, but actual chrome. It is a long very involved process that uses conductive paint as a base for the initial copper.

I checked into it with the intention of having the original fiberglass grill surround plated. The plating company wanted $600 to plate it!!!!! And, it would not be warrantied.

There is also some very impressive chrome paint out there, too. It has an appearance very similar to chrome, but has the downside of just being paint and therefore no more durable. It also takes very specialized equipment to apply.

Similar topics
» Need grill surround for Sebring 5000
» Who would be interested in new hard tops, scooped hoods and other parts if I reproduced them?
» New Healey Replica Manufacturer
» Windshield chrome side trim
» Sebring grille surround versus original Healey