I am thinking about converting my 700r4 to a manual setup. My question is- what is the best set up to do this with? I currently have a 383 stroker and not sure of gears? What would be the easiest and estimated cost? 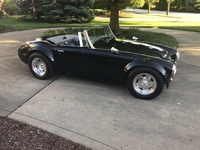 The easiest solution would be to call someone like American Powertrain and tell them what you want to do.  I'll guess that they can put you a kit together with a TKO 600 5-spped that will have pretty much everything you need.  That won't be the cheapest solution by a long shot, though.

Since you have a 383, you will need something that can handle the torque.  None of the 5-speeds that GM installed at the factory behind a small block would be reliable with a stroker, unless you baby it.  They only came behind 305's and were only good for about 300 lb ft of torque.

If you don't need overdrive, there are a bunch of old muscle cars that came with 4-speeds that you might source for complete trans/bellhousing/shifter and flywheel.  Of course, those old 4-speed cars are in high demand by folks wanting a 4-speed conversion for their muscle cars, so the price may not be cheap due to demand.

If you want overdrive, GM put 6-speeds behind the early 90's LT1's that came in camaro's and trans am's.  If you have a 1-piece rear main seal, that whole combo should bolt up behind your engine.  If you have a 2-piece rear main, your out of luck since they used a special pull type clutch.  I don't think anyone makes a flywheel for that clutch with a 2-peice rear main and I believe the stock input shaft is too short for a standard Chevy clutch.

That pretty much leaves finding used parts on classified sites or at a swap meet, but there is no guarantee that they will be good parts.

Personally, I would go with mostly new parts to keep the hassle factor low.  The TKO 600 (which will handle 600 lb ft of torque)runs around $2600 brand new with a GM bolt pattern and it comes with a shifter.  You could source a bellhousing from a salvage yard.  I would look into a mid 90's truck bellhousing.  They had an external hydraulic clutch slave cylinder already attached and replacement parts are readily available.  You might have to buy an adapter ring since the trucks usually had a larger input shaft bearing hole in the bellhousing.  A manual flywheel should be easy to find and fairly cheap.  You can spend a little or a lot for a clutch assembly. There is a wide range of prices and applications.

I'm going to guesstimate that you could do it with everything new except the bellhousing for around $3000 with careful shopping.  If you can get by with 4 speeds, you can buy a brand new T-10 for about $600 less than the TKO 600, but you will need to source a 4-speed shifter, so that option may not be much cheaper.  If you are willing to take a chance on a used trans, you could probably half that guess, maybe even less.

BTW-You will most likely need to move the crossmember and redo the driveshaft.  The TKO 600 is approximately the same length as the 700R4, but there is no way to know if the driveshaft will work as is.  Also, you will  need to figure out what pedals you have and source something with a clutch pedal.  It's doubtful that a powertrain vender will have any clue as to how to put a clutch pedal in a Sebring.

As a final option, I think that there are aftermarket bellhousings that will bolt to your Chevy and accept a Ford T-5 trans.  Ford used a lot of World Class T-5's in mustangs.  They MIGHT hold the 383 torque and should be fairly easy to come by used.  I don't have any idea how much this type of hybrid conversion would cost.

Thank you for the reply and plenty of options to think through. I’m thinking about the tko 600 as my best bet. This would also be the easiest option even though it wouldn’t be the cheapest but reliability is important as well. Thanks again!